Business: 2018 PwC Outlook for the sports market in North America through 2022, Opportunities 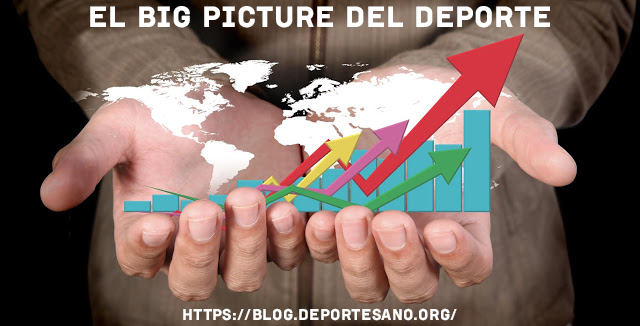 PwC projects the sports market in North America will grow at a compound annual rate of 3 percent across the four segments analyzed, from $69.1 billion in 2017 to $80.3 billion in 2022. 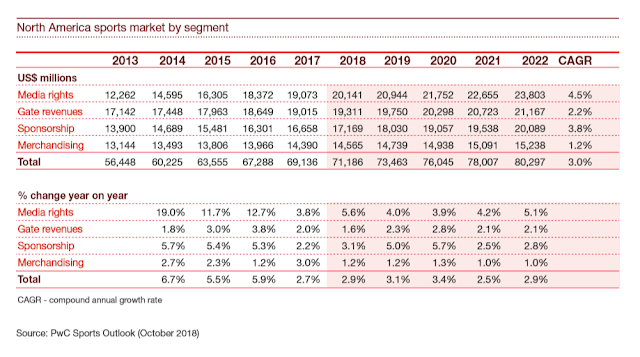 Media rights officially became the industry’s largest segment in 2017, a year earlier than anticipated due to slower growth for gate revenue than previously forecasted. With key deals underlying the media rights segment locked in until 2022, the growth of rights in the near term are driven by contractual escalators within the national deals, as well as the run-off of 16 regional sports network (“RSN”) deals across MLB, NBA and NHL through 2020.

Gate revenues are projected to increase at a compound annual rate of 2.2 percent, from an estimated $19 billion in 2017 to a projected $21.2 billion in 2022. Despite benefiting from league expansion and new facility development, gate volume metrics (ticket sales and game attendance) have leveled off—and even decreased—as competition from game broadcasts and price pressure on certain ticket buying segments have continued to increase.

Sponsorship is estimated to surpass the $20 billion threshold in 2022, at which point it is projected to close its market size gap to within $1.1 billion of gate revenue. Future segment growth, projected to be the second highest across the four segments, should be supported by new inventory related to gambling, digital media platforms, uniform rights, and incremental in-venue signage and naming rights opportunities.

Licensed merchandise sales are projected to increase at a compound annual rate of 1.2 percent (from an estimated $14.4 billion in 2017 to a projected $15.2 billion in 2022). The segment remains a relatively saturated market in North America with broad coverage of key consumer product categories and deep penetration of traditional buyer segments.

While we are only a few months into legalized sports wagering in certain states, it is clear that the opportunity for teams and leagues to monetize it can be great. Whether it is through media or sponsorship, combining wagering with increased fan engagement could also increase ticket revenue or retail revenue. In the long run, the stakes  are high. 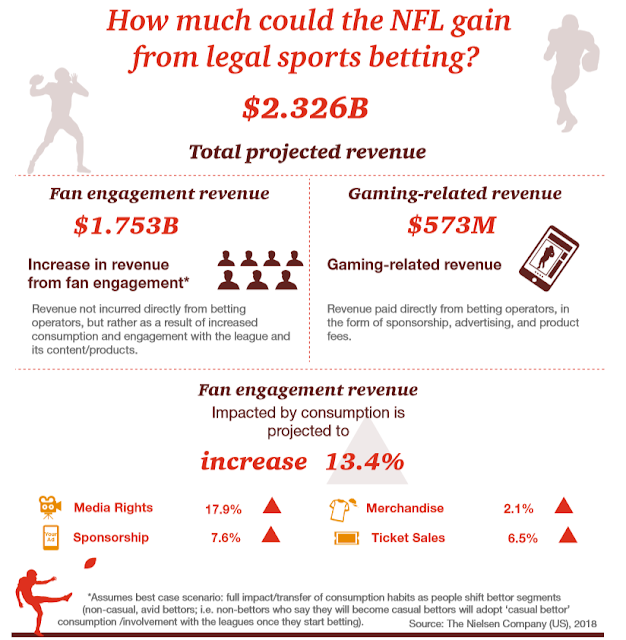 What are the biggest drivers for any brand? To name a few: Reach. Immersion. Impact. What keeps professional sports leagues buoyant and profitable is access—as lucrative media rights deals have skyrocketed, more notably, player salaries have followed suit.

Since the advent of television, major sports media rights have a handful of bidders—national networks and regional sports networks—the only suitors with the capacity to distribute so widely. But the game is changing. The digital revolution is attracting new entrants into this exclusive competitive space: these include the FAANGs (Facebook, Amazon, Apple, Netflix, Google) and both A’s are the only publicly-traded companies that have exceeded one trillion dollars in market capitalization.

Fans are paying for the opportunity NOT to watch an actual game, instead watching live moments from multiple games unfold simultaneously. At a time when many care more about their fantasy teams than their favorite teams, media rights bidders need to take notice.

No matter how consumers experience live sports (in 2023 and beyond) across their devices, channels and apps, one thing is for sure—all signs point to an increase in competition for sports media rights which could yield a significant rights fee increase.

References:
PwC, PwC Sports Outlook (October 2018), At the gate and beyond, Outlook for the sports market in North America through 2022, October 2018, link: https://www.pwc.com/us/en/industries/tmt/library/sports-outlook-north-america.html.
Posted by Director of genioux facts at 2:37:00 a. m.