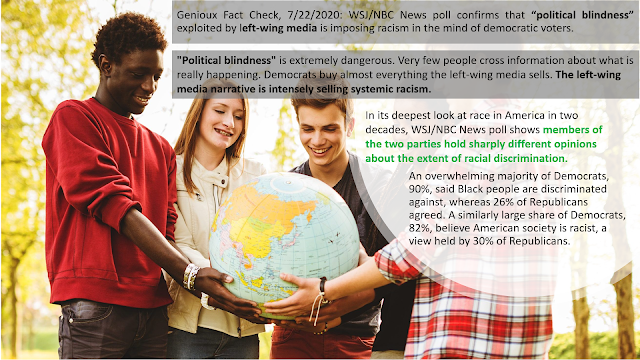 Political polarization creates extremely dangerous blindness because very few people cross information about what is really happening. The left-wing media narrative is intensely selling systemic racism. The serious acts of violence that are taking place in several major cities in the United States are hidden or distorted so as not to contradict their false narrative. For example, upward of 95% of black homicides in the U.S. don’t involve law enforcement. Democratic leaders and their Media don’t report on blacks killed by blacks, which is most cases. It contradicts their false narrative.
In its deepest look at race in America in two decades, WSJ/NBC News poll shows members of the two parties hold sharply different opinions about the extent of racial discrimination. An overwhelming majority of Democrats, 90%, said Black people are discriminated against, whereas 26% of Republicans agreed. A similarly large share of Democrats, 82%, believe American society is racist, a view held by 30% of Republicans.