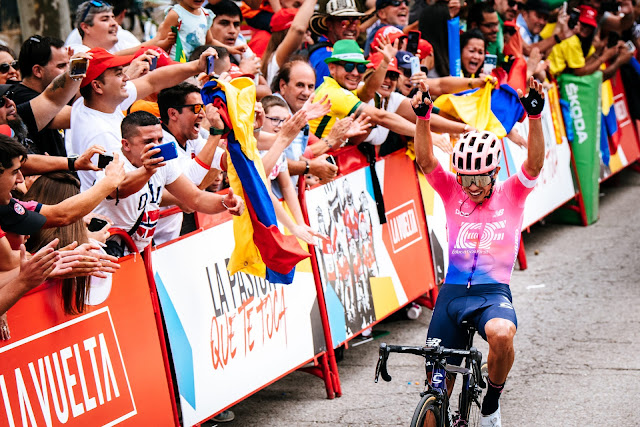 We are EF Education First, the international pro cycling team on a quest to share our story and our sport with the world. We believe cycling is for everyone – so this season, we’re tackling new races and rides around the globe. Because that’s where everyone is.

“EF’s commitment is to bring different cultures together, to spark mutual understanding around the ways people and communities approach and see life. The goal is to promote empathy among people of diverse backgrounds, and inspire new ways of thinking which together can help make the world a little better. EF Pro Cycling is a platform that embodies this spirit, and which helps show how positive things happen when people explore the world.” - Edward Hult, CEO EF North America.

With a strong global presence in more than 100 countries, EF provides opportunities for people of all ages and backgrounds to explore the world.

We believe exploration is a transformative form of education, and that the more we seek out new places, the more we’re able to grow as individuals and connect with others. These experiences change how we think, act and feel, inspiring the kind of empathy that makes the world a better place for us all.

Much like exploring the world, cycling unites people from different backgrounds to achieve great things together.

In 2019 the EF Education First team is embarking on a journey to spread this message – and not just to pro cycling fans. In addition to prestigious WorldTour races like the Tour de France, the EF team will participate in popular amateur cycling events around the globe.

Taylor Phinney, Team Rider: To be racing for a team that is embracing this kind of a mantra is super special

“I often think about how I could spend the rest of my life moving around this planet, seeing different things that I wouldn’t see everyday, and I sort of feel like I need to start doing that now. To be racing for a team that is embracing this kind of a mantra is super special and I’m really grateful to be involved and I want to help to grow that as a concept and, to be the one who’s at the forefront of the exploring.” – Taylor Phinney, Team Rider 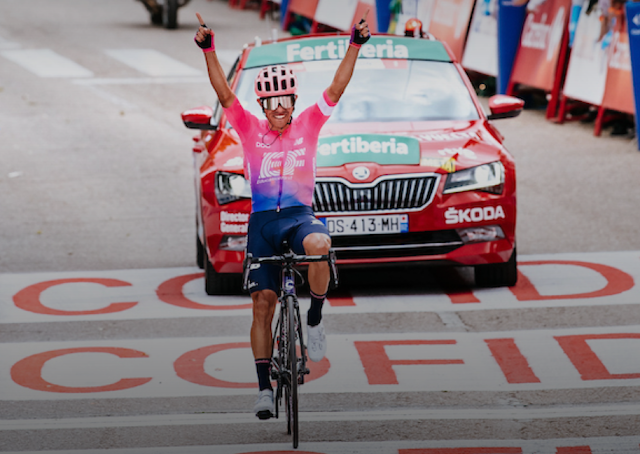 ‘During this Vuelta, I learned to never give up’

Every morning during the team meeting on the EF Education First bus, sport director Juanma Garate outlines the team plan to his depleted Vuelta a España squad. Only five riders remain from the eight starters. Hugh Carthy, Rigoberto Urán, and Tejay van Garderen were forced out of the race with injuries in the first week.

The crashes took whatever plans the team had and threw them out the window. The five riders left in the race, without their team leaders to look after, were tasked with stage hunting across Spain, Andorra and France. No small ask.

“Everybody knew that we had a really nice opportunity today, but where do you find the motivation for the guys when you are saying more or less the same thing for two weeks?” wondered Garate. “I felt that. I know they did. This was the last opportunity to win a stage. I told them that, and I told Sergio, his life would change if he did.”

Sergio Higuita, the 22-year-old neo-pro who got his WorldTour call up in May. The Vuelta is his maiden Grand Tour, and in Becerril de la Sierra on Thursday, Higuita scored his first WorldTour win.

“It’s a dream to be at the Vuelta, riding a Grand Tour,” said Higuita. “And now, winning a stage, it’s very important. It’s the biggest win of my sporting career.”

“To win one stage in a big Tour, it is really special,” Garate said. “Especially when you are 22-years-old, especially when everyone is talking about you and what you can do in the future. He’s a big guy even if he’s really small.”

Higuita launched his race-winning attack over the top, 52-kilometers from the finish, with Garate in his ear, urging him forward.

“I asked him to go,” said Garate. “It was the only chance we had. Go back, breathe, then go. Right after the top, he had to go. He did it. He dropped everyone. It was so cool.”

Gap gained, Higuita next had to hold off his chasers – the breakaway riders and the general contenders who were throwing attacks in his wake.

“The truth behind someone never surfaces when things are good but instead when hard things hit,” said EF Pro Cycling’s CEO, Jonathan Vaughters. “Today, we saw the truth behind Sergio.”

“During this Vuelta, I learned to never give up. After the bad moments that you have during a Grand Tour, each day is a new day and any day you can finish with a victory,” Higuita added. “I showed resiliency because yesterday I had a very, very difficult day and today I won the stage. I took it as it came and turned a bad situation into a good one.”

The Vuelta has been a rough road, no doubt — but it’s in the moments when things aren’t perfect that a team finds out what it truly is, and what it can be.