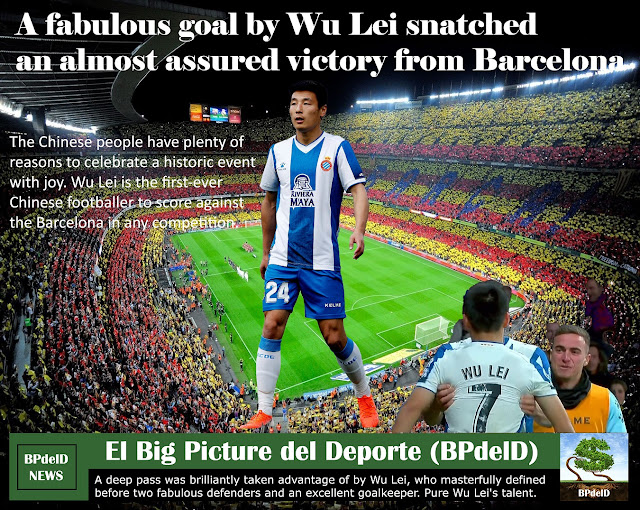 A deep pass was brilliantly taken advantage of by Wu Lei, who masterfully defined before two fabulous defenders and an excellent goalkeeper. Wu Lei's talent snatched a victory from the all-powerful Barcelona. The Chinese people have plenty of reasons to celebrate a historic event with joy. Wu Lei is the first-ever Chinese footballer to score against the Catalans in any competition.


An important goal from Wu Lei gives a point to RCD Espanyol in the Barcelona's derby and Abelardo's debut as local coach #EspanyolBarça J19 LaLiga Santander 2019/2020.

Espanyol's Wu Lei became the first Chinese footballer to score against Barcelona on Saturday and has revealed how the goal that went viral was planned while he was warming up. Chinese media on Sunday declared the strike as heralding "a new chapter" in Chinese football while one related hashtag generated 370 million views on social media platform Weibo.

During Saturday’s La Liga game against Barcelona, Espanyol star Wu Lei set a historic by becoming the first-ever Chinese footballer to score against the Catalans in any competition.