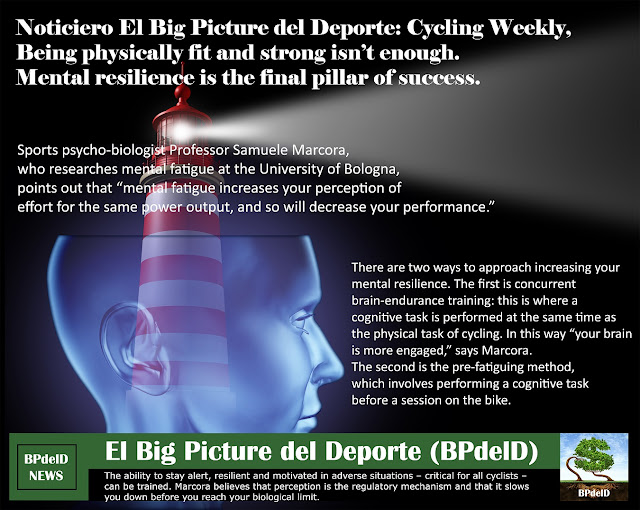 It is clear that mental fortitude is an essential part of racing; it is not necessarily the strongest who wins, but the rider with the most grit. You can be as fit as you like, but if you can’t hack it when the unexpected is thrown your way, that’s a missed opportunity to excel. When the going gets tough, others will crumble. Your mental resilience can be improved through adversity training, whether this is by the conscious inclusion of specific sessions, or just by re-thinking how you factor-in the unplanned stresses of life. Indoors or outside, doing it once a week is all that’s needed for progression. Engage your mind, add grit, and your legs will do the rest.

Samuele Marcora, the 47-year-old director of research at the School of Sport and Exercise Sciences at England’s University of Kent, doesn’t consider himself an endurance athlete. But he’s fast becoming one of the most talked-about researchers in the field. The article, titled “Mental Fatigue Impairs Physical Performance in Humans” and published in the Journal of Applied Physiology, suggested that fatigue and the role it plays in endurance sports might be mostly in your head.

Muscle fatigue due to limited oxygen delivery and lactic acid accumulation is thought to set the speed an endurance athlete can sustain during a competition (e.g. the marathon). This is because above that speed, muscle fatigue would develop too quickly and the athlete would reach exhaustion before the finish line. In this lecture, Professor Samuele Marcora from the University of Kent challenges this physiological model of endurance performance, and proposes an alternative model in which perception of effort and motivation are the main factors determining endurance performance. He also discusses how this psychobiological model can be used to develop innovative interventions aimed at further improving endurance performance.