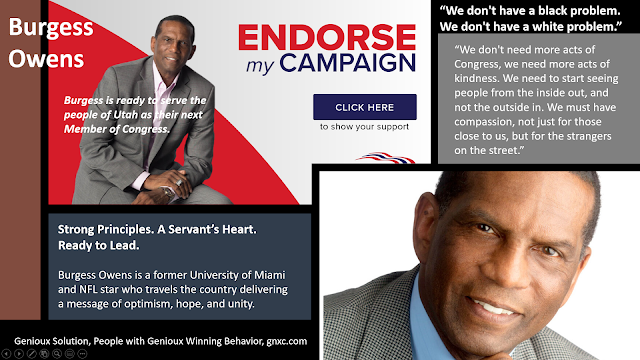 Owens, a former NFL star who is running for Congress as a Republican in Utah, is also an African-American. He took to social media on Thursday to present the need for understanding and respect on both sides of the issue.
“We don't have a black problem. We don't have a white problem. We have an empathy problem. That officer did not see George Floyd as a person, he didn't care who he was inside. It never crossed his mind to think of what it's like to be in his shoes,” Burgess wrote on Facebook.
“We have officers being killed across our country, spit on [and] shouted at by groups that don't see them as people. They don't wonder if they're good or bad, or what their heart is like.
“We don't need more acts of Congress, we need more acts of kindness. We need to start seeing people from the inside out, and not the outside in. We must have compassion, not just for those close to us, but for the strangers on the street.”

Former NFL safety Burgess Owens told "Tucker Carlson Tonight" Thursday that those demanding New Orleans Saints quarterback Drew Brees apologize for saying he would never agree with people who disrespect the American flag are "elitists" who are embarrassments to their home country.
"What you're seeing here is exactly why President Trump will be elected once again; as they were surprised last time," Owens told host Tucker Carlson. "Americans don't like bullies. They don't like people who demand that we disrespect our flag and our country. I think what Drew did, he was spot on."
Posted by Director of genioux facts at 3:08:00 p. m.