Genioux FACT CHECK: IRRESPONSIBLE BEHAVIORS are putting the U.S. and the entire world in danger!

The "genioux facts" (blog.geniouxfacts.com) form a fundamental basis to build a better world for all. 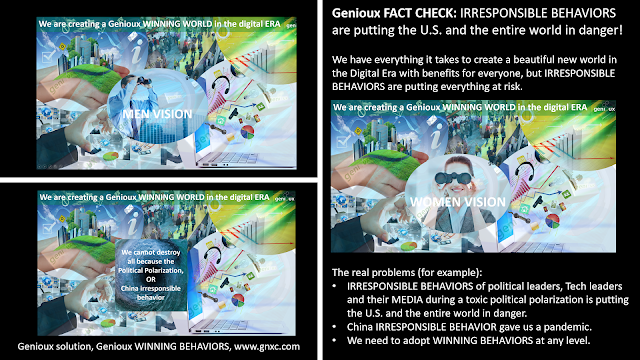 We have everything it takes to create a beautiful new world in the Digital Era with benefits for everyone, but IRRESPONSIBLE BEHAVIORS are putting everything at risk.
The real problems (for example):

IRRESPONSIBLE BEHAVIORS of Democratic political leaders, their MEDIA and Tech leaders during a toxic political polarization are putting the U.S. and the entire world in danger

Genioux.com Corporation has identified problems that have a whirlwind-like behavior, with gigantic pull forces sinking brilliant solutions, thriving debates, growth, and prosperity. Those problems are specific to some countries and in some cases general to most countries.
Political polarization in the U.S. is a whirlpool problem with disastrous consequences for the country. The United States that Democratic leaders and their Media (e.g., CNN, The New York Times, The Washington Post) sell us is depressing, for example, systemic racism, systemic police brutality, chaos on the streets, chaos in the economy, chaos in the fight against the coronavirus. It is what we have called "toxic realism", parodying the magical realism of the Colombian Nobel Prize winner Gabriel García Márquez.
Democratic leaders and their Media are campaigning with an incredible mediocre strategy:
Hate (against the President Donald J. Trump (@realDonaldTrump)) +
Fear (with coronavirus to destruct the economy) +
Chaos (with fake problems like systemic racism, systemic police brutality and bombshells) +
The political blindness caused by a toxic polarization.
Tech leaders like Twitter and Facebook have helped spread all these negative feelings of hate, fear, chaos, and political blindness.

The real problem of our beloved African American community:

Genioux Solution in just one image

Genioux Corporation has a general solution for the growth of any community, and in particular for the unlimited growth of our beloved African-American community. 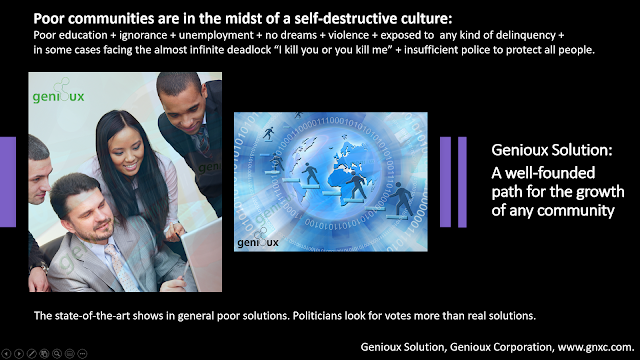 The essential part of the solution is that everyone follows a Genioux Winning Personal Behavior. 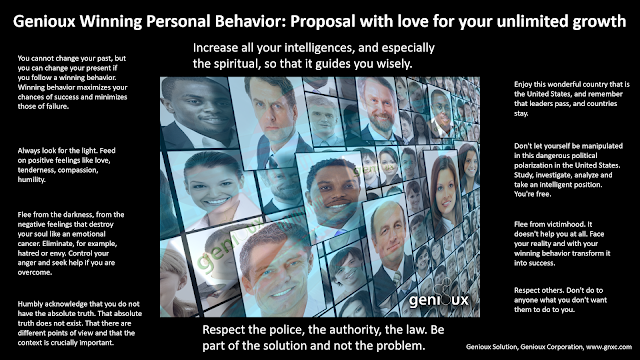 Every member of the great African American community must grow without limits. 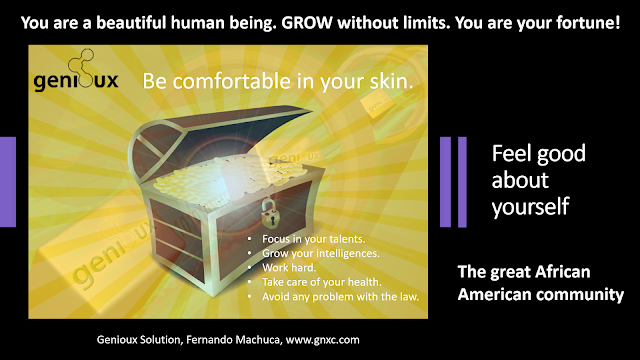 Complementary links of the Genioux Solution (In process)

The SAFE WINNING Economy in the NEW NORMAL is the implementation of Genioux WINNING Pyramid
Genioux Digital Vaccine
Genioux Winning Personal Behavior: Proposal with love for your unlimited growth
Genioux Dangerous Whirlpool Problems
The story of how with your support humanity was saved
Genioux Winning Knowledge Gallery
Posted by Director of genioux facts at 8:34:00 a. m.