Noticiero El Big Picture del Deporte: ESPN, How the NBA's race for the 2-seed in the East playoffs will be decided 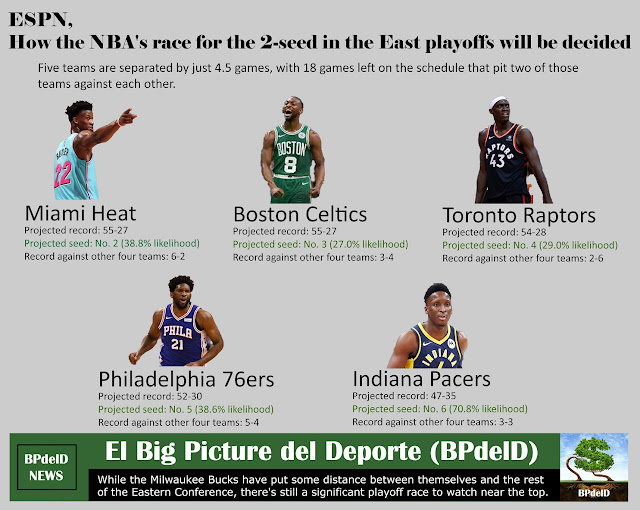 While the Milwaukee Bucks have put some distance between themselves and the rest of the Eastern Conference, there's still a significant playoff race to watch near the top. Approaching the midpoint of the season, the next five teams are separated by just 4.5 games, with 18 games left on the schedule that pit two of those teams against each other.


Present and future outlook: The Heat are back. Miami has reestablished its identity as a hard-nosed team full of grinders surrounding a couple of tentpole stars now that Adebayo has emerged as one of the best young centers in the league. That alone makes this season a success.


Present and future outlook: This Celtics team has made a remarkable turnaround from last season's disappointment, making a case for the value of team chemistry. That alone has this season feeling like a success.


Present and future outlook: The Raptors entered the season as defending champions but without any expectations of a repeat, due to Leonard's departure. Yet Toronto has played like a team with a point to prove. The next four weeks will reveal whether the Raptors are still in win-now mode.

Present and future outlook: The up-and-down nature of this season has made it hard at times to remember what this team can be when it is healthy and engaged. And the Sixers' lack of consistency could leave them in an undesirable position come April, as Philadelphia could find itself starting every playoff round on the road.

Present and future outlook: A healthy Oladipo might be the biggest addition any of these teams will make in the next four weeks. If he can return to form, Indiana can make a run. Regardless, the Pacers have shown they will, at the very least, be a tough out for the team that gets matched up with them in Round 1.