Business: The special story of Giannis Antetokounmpo the 2018-19 NBA Most Valuable Player award 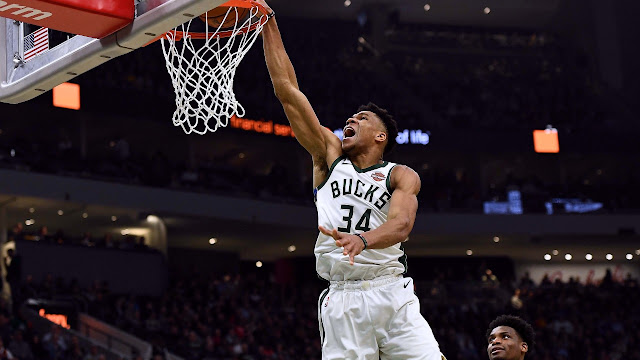 Giannis Sina Ougko Antetokounmpo (born December 6, 1994) is a Greek professional basketball player for the Milwaukee Bucks of the National Basketball Association (NBA). Although nearly 7 feet tall, Antetokounmpo possesses the "ball-handling skills of a point guard and the battering ram force of an old school center," giving rise to his nickname the "Greek Freak".

During the 2015–16 season he became the Bucks' primary playmaker, and in 2016–17 he led the Bucks in all five major statistical categories and became the first player in NBA history to finish a regular season in the top 20 in total points, rebounds, assists, steals, and blocks. He received the Most Improved Player award in 2017.

He has received three All-Star selections, and led the Eastern Conference in voting in 2019. That same year, he was named NBA Most Valuable Player.

Antetokounmpo was born in Athens, Greece, on December 6, 1994, the son of immigrants from Nigeria. Three years earlier, his parents had moved from Lagos, leaving behind their firstborn son, Francis, with his grandparents. Though Antetokounmpo and three of his four brothers were born in Greece, they did not automatically qualify to receive full Greek citizenship as Greece does not have birthright citizenship. For the first 18 years of his life Antetokounmpo was effectively stateless, having no papers from Nigeria or Greece.

Antetokounmpo grew up in the Athens neighborhood of Sepolia. The New York Times reported: "Like many other immigrants to Greece, his parents struggled to find work. Antetokounmpo and his older brother, Thanasis, helped out by hawking items such as watches, bags and sunglasses." In 2007 Antetokounmpo started playing basketball, and by 2009 he was playing competitively for the youth squad of Filathlitikos. In 2011 he joined the senior men's team of Filathlitikos, and played with them in Greece's third-tier level semi-pro league, the Greek 3rd Division, during the 2011–12 season.


Brian Sampson wrote for Forbes the article, Giannis Antetokounmpo Rises To The Challenge, Wins MVP. Some key points of the article.

Forbes magazine is well known for its lists and rankings, including of the richest Americans (the Forbes 400), of the world's top companies (the Forbes Global 2000), and The World's Billionaires.

Forbes has tracked the leading earners in sports for three decades, and only seven athletes have landed in the top spot since 1990 (Tiger Woods holds the record with 12 times at No. 1). Global soccer icon Lionel Messi adds an eighth name to the roll call this year and, after longtime rival Cristiano Ronaldo, is only the second soccer player to rank first.

The top 100 spans 10 sports and includes athletes from 25 countries. Their $4 billion in combined earnings from prize money, salaries and endorsements between June 2018 and June 2019 is up 5% from last year, when Floyd Mayweather was first with $285 million.