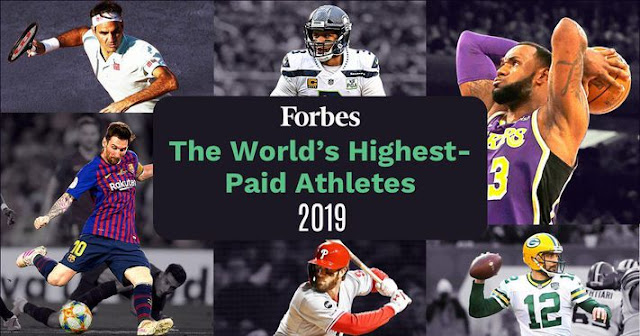 The magazine is well known for its lists and rankings, including of the richest Americans (the Forbes 400), of the world's top companies (the Forbes Global 2000), and The World's Billionaires.

Forbes has tracked the leading earners in sports for three decades, and only seven athletes have landed in the top spot since 1990 (Tiger Woods holds the record with 12 times at No. 1). Global soccer icon Lionel Messi adds an eighth name to the roll call this year and, after longtime rival Cristiano Ronaldo, is only the second soccer player to rank first.

The top 100 spans 10 sports and includes athletes from 25 countries. Their $4 billion in combined earnings from prize money, salaries and endorsements between June 2018 and June 2019 is up 5% from last year, when Floyd Mayweather was first with $285 million. 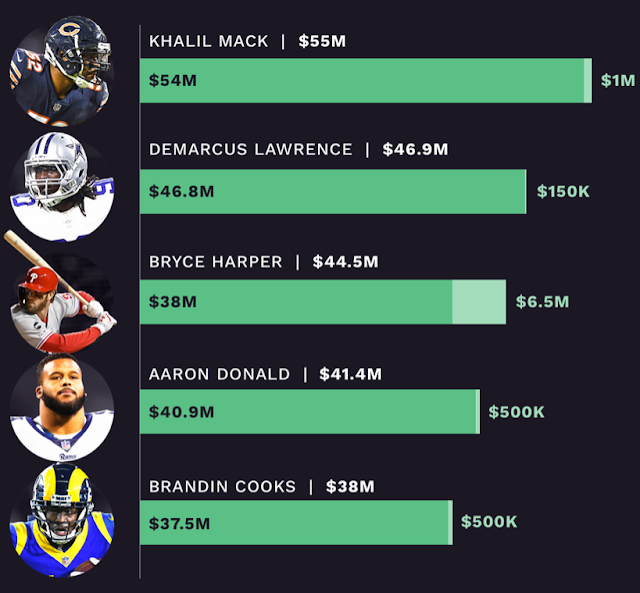 NFL contracts for elite stars carry huge upfront signing bonuses, pushing this quartet of gridiron greats to career-high paydays and their first appearances on the top 100. They are joined by Philadelphia’s new $330 million slugger.

Thirty-five NBAers made the cut, with cumulative earnings of $1.3 billion. Credit basketball’s skyrocketing player salaries driven by a near doubling of the salary cap over the past five years. Tennis players make four times as much from endorsements and appearance fees as from prize money.

USA vs The World 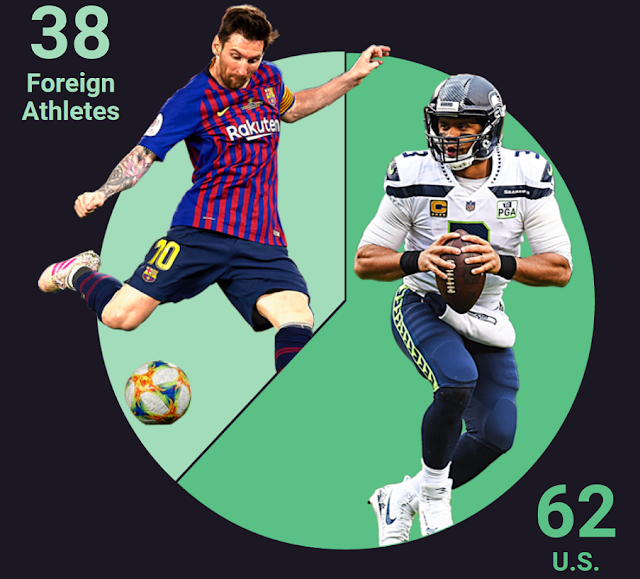 More than half of the top 100 earners play in the NFL or the NBA, giving Americans the advantage on total earnings, but the rich endorsement portfolios of international tennis and soccer stars mean higher average earnings for those outside the U.S. 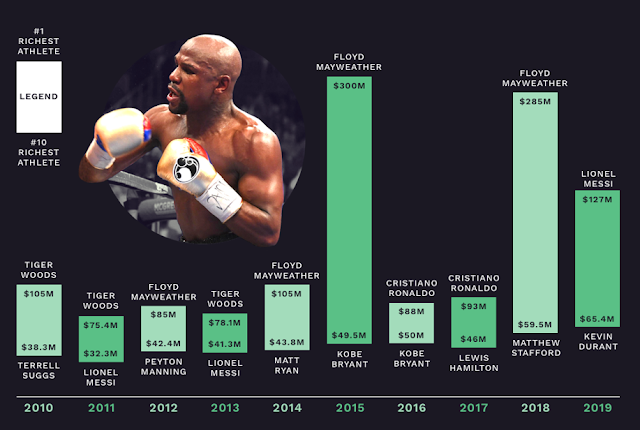 The top earner in sports has regularly banked more than $100 million annually since Tiger Woods rose to prominence in the 2000s, but the major shift is the rise of the next class of paychecks. The earnings for the tenth-highest-paid player is up 150% in 15 years.

Elite athletes are earning more than ever thanks to soaring salaries driven by ever-richer TV contracts. The cutoff to crack the world’s 100 highest-paid athletes is $25 million this year, compared with $17.3 million five years ago.

Here is a breakdown of the sports, nationalities, sponsors and more for the world’s 100 highest-paid athletes.

The NFL was the next-best-represented sport with 19 athletes. Russell Wilson ($89.5 million) and Aaron Rodgers ($89.3 million) are well ahead of their peers after signing new deals with signing bonuses worth a combined $115 million.

Baseball (15 athletes); soccer (12); golf, boxing and tennis (5 each); and racing (2) also landed multiple stars in the top 100. For the fourth straight year, Virat Kohli ($25 million) and McGregor were the lone representatives from cricket and mixed martial arts. No NHL player or Nascar driver earned $20 million during the past year.

There are 25 countries represented in the top 100. The United States had 62 athletes make the cut, thanks to the sky-high salaries in the major U.S. sports leagues, although the tally was down from 65 in 2018. Formula One driver Lewis Hamilton and boxer Anthony Joshua (both at $55 million) led the U.K contingent of five athletes. France and Spain each had three athletes while Brazil, Canada, the Dominican Republic, Germany, Serbia and Venezuela all had two.

This is the list of the countries with one athlete in The World's Highest-Paid Athletes:

The top 100 earned $986 million from endorsements, memorabilia and appearance fees, up 12% from last year, as companies focused their marketing budgets on elite talent. Nike has the most athletes under contract, with 51 of the top 100.

Nike’s chief rival, Adidas, endorses 17 athletes in the top 100, including those under its Reebok brand. PepsiCo, along with its Gatorade and Mountain Dew brands, is affiliated with 13 athletes by Forbes’ count.

The biggest surprise is that not a single Chinese superstar is found in The World's Highest-Paid Athletes. China is a global powerhouse in multiple areas (e.g., business, science, and technology). From now on I anticipate that we have to count on China on the next list.

Business: The future of sports media rights and the digital revolution impact according to PwC.

Business: 2018 PwC Outlook for the sports market in North America through 2022, Opportunities.

Business: 2018 PwC Outlook for the sports market in North America through 2022, Summary.