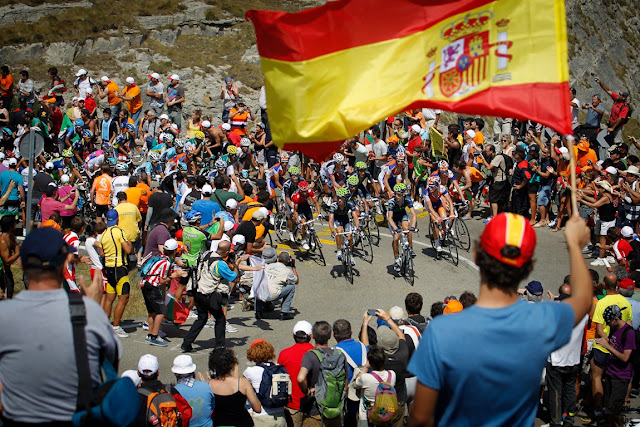 The start of the 2019 Vuelta a España is just three days away, and Cyclingnews has taken a look at 10 of the major contenders to gauge their form ahead of the race, which starts in Salinas de Torrevieja in south-east Spain on Saturday, August 24.

Overview: From the end of February until the start of May, Roglič won the overall classification of every race he entered: the UAE Tour, Tirreno-Adriatico and the Tour de Romandie.


Highlight: His continued rise and rise, winning the overall at the UAE Tour, Tirreno-Adriatico, the Tour de Romandie and two time trials at the Giro.

Lowlight: His bid for Giro victory effectively ended after a mechanical and crash on stage 15.

Overview: Despite the presence of more experienced, more proven GC riders on his own team, it would be no surprise to see Carapaz emerge as the true leader of Movistar over the next three weeks. The Ecuadorian proved his abilities back in May, when he won the Giro d'Italia, in what was only his fourth Grand Tour participation. While he's lain low, training in his home province of Carchi, his co-leaders Quintana and Alejandro Valverde have raced the Tour de France.

Lowlight: It's hard to imagine one – his season has already exceeded all expectations.

Overview: Ostensibly at the Vuelta this year to support Jumbo-Visma teammate Primož Roglič, Steven Kruijswijk nevertheless has the firepower to himself be a contender, should he find himself in the right position.

Lowlight: None really to speak of, other than momentary upset at having dropped from third overall to fourth at the Tour after stage 18, only to bounce back to the podium on the penultimate stage to Val Thorens.

Overview: Will there be one last hurrah for Quintana at Movistar? The Colombian has spent the past eight seasons with the Spanish WorldTour team, but will almost certainly change teams in 2020.

Highlights: Second overall at Paris-Nice back in March, and a well-taken solo stage win and eighth place overall at the Tour de France.

Lowlights: A Tour de France in which there were once again too many chiefs.

Overview: At the Giro d'Italia in May, on the stage-19 summit finish at San Martino di Castrozza, Chaves signalled that he was back at something approaching his best when the Colombian took an emotional stage victory, which was his first since the Giro the previous year. Between the two victories, the 29-year-old had experienced the frustration and helplessness that comes with battling mononucleosis.

Lowlight: Possible frustration in the journey 'back', but he seems in a good place now.

Overview: Like López, Majka has not raced between the Giro and the Tour de Pologne, skipping the summer races for a tilt at the Vuelta. The Spanish race was the site of his last win, back in 2017 at Sierra de la Prandera, and a stage victory plus top-five placing would be a dream Vuelta for the Pole.

Highlight: Steady riding through the spring netted top tens at Catalunya, Tour of the Alps and the Giro.

Overview: Another rider who has kept quiet since the Giro, López has only raced the Tour de Pologne since completing the first Grand Tour of the year, where he finished seventh and took the best young rider's jersey.

Highlight: Winning Colombia 2.1 and the Volta a Catalunya.

Lowlight: Never quite looking at his best at the Giro.

Overview: Urán has so far been unable to repeat – or better – his second place at the 2017 Tour de France, but this year's Vuelta would be a great place to do it.

Highlight: Perhaps yet to come, but seventh overall at the Tour de France isn't to be sniffed at.

Lowlight: March's crash at Paris-Nice, which set back Urán's build-up to the Tour. A reset goal of the Vuelta will be his opportunity to shine.

Overview: After a poor 2018, iliac artery surgery back in April seems to have solved what was slowing the Italian all season. He got back to racing in Switzerland in June ahead of the Tour, and rode steadily to 14th overall at La Grand Boucle. Often hanging with the favourites group deep into the climbing stages, his best performance in France was 19th on the Tourmalet.

Highlight: Successful diagnosis of, and return from, his iliac artery problem.

Lowlight: Another season not at his best, though through no fault of his own.

Overview: Possibly the darkest of horses among our list, Kelderman will be looking to grasp this opportunity to turn an injury-hit season around with both hands. With Tom Dumoulin’s season over thanks to a lingering knee injury sustained at the Giro d’Italia, and the Dutchman heading to pastures new in 2020, the Vuelta might just be Kelderman’s chance to stake a claim as Team Sunweb’s GC leader going forward.

Highlight: Fifth at the UAE Tour? It's been a hard year.

Lowlight: The crashes and injuries.