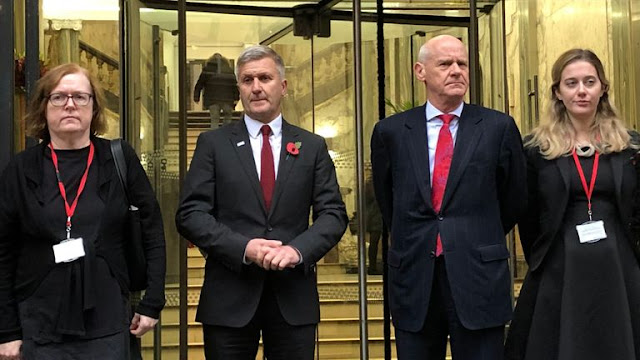 Dr Richard Freeman was absent when his medical tribunal hearing began again in Manchester on Thursday, with his lawyer Mary O'Rourke saying her client had "an adverse reaction to what happened here Tuesday," when O'Rourke had a tense exchange with Shane Sutton and he abandoned the hearing after calling Freeman "spineless".

Shane Sutton, the former head coach of British Cycling and Team Sky, has refused to return to Dr Richard Freeman’s medical tribunal despite efforts to persuade him to change his mind after he stormed out on Tuesday.

The Guardian, Shane Sutton will not return to Richard Freeman tribunal after walkout, Sean Ingle, November 13, 2019.

Dr Steve Peters, a former head of medicine for both organisations, took the stand but failed to provide any answers as to why a drug that is banned in and out of competition was ordered and stored at the facility or for whom it was intended.

British Cycling's former head of medicine has cast doubt on Dr Richard Freeman's claims that testosterone was delivered to its headquarters on behalf of Shane Sutton, a tribunal has heard.


British Cycling and Team Sky kept a stock of Viagra for riders in a cabinet because riding for so long gave them “nerve issues”, Dr Richard Freeman’s medical tribunal was told on Thursday.

Dr Freeman’s QC, Mary O’Rourke, put to Dr Peters: “If it was ordered to dope a rider, that’s not how you would do it unless you were mad.” Dr Peters agreed and also suggested that an athlete using such a patch would quickly fail a doping test.