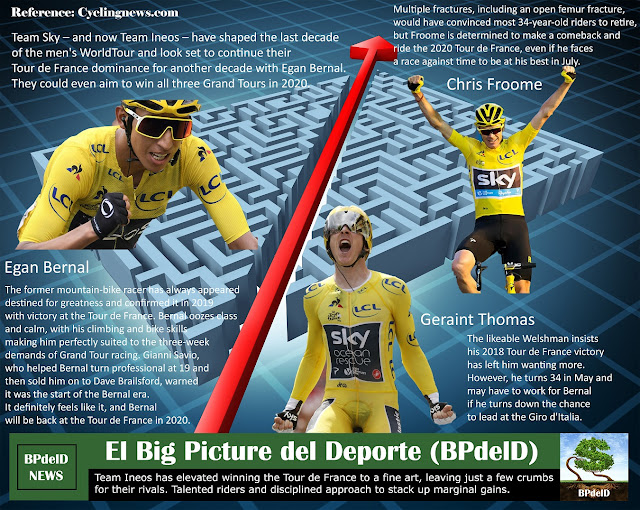 Team Ineos has elevated winning the Tour de France to a fine art, leaving just a few crumbs for their rivals. Team Sky – and now Team Ineos – have shaped the last decade of the men's WorldTour and look set to continue their Tour de France dominance for another decade with Egan Bernal. They could even aim to win all three Grand Tours in 2020. Team Ineos have used their big budget, talented riders and disciplined approach to stack up marginal gains and emerge as the very best super team in the men's WorldTour.

Egan Bernal: The former mountain-bike racer has always appeared destined for greatness and confirmed it in 2019 with victory at the Tour de France. Bernal oozes class and calm, with his climbing and bike skills making him perfectly suited to the three-week demands of Grand Tour racing. Gianni Savio, who helped Bernal turn professional at 19 and then sold him on to Dave Brailsford, warned it was the start of the Bernal era. It definitely feels like it, and Bernal will be back at the Tour de France in 2020.

Chris Froome: Multiple fractures, including an open femur fracture, would have convinced most 34-year-old riders to retire, but Froome is determined to make a comeback and ride the 2020 Tour de France, even if he faces a race against time to be at his best in July.

Geraint Thomas: The likeable Welshman insists his 2018 Tour de France victory has left him wanting more. However, he turns 34 in May and may have to work for Bernal if he turns down the chance to lead at the Giro d'Italia.